Supplement: Genital Application of Estradiol as a Powerful Transdermal Route for Transfeminine People

This article is for supplemental material to the main article here.

Here are some of the most relevant excerpts from the study paper (translated from Spanish into English):

The goal of orchiectomy, surgical or hormonal, is to lower plasma testosterone (T) below the castration level (≤50 ng/dL). Ninety-percent to 95% of a man’s T comes from the testicles that secrete approximately 6 to 7 mg daily and the half-life is 45 minutes. The level of castration is reached with surgical orchiectomy in about 8 hours; with estrogen (E) in about 38 days (21 to 60) and approximately the same time with GnRH analogues.4

Arguments for the treatment of prostate cancer with estradiol (E2) transdermal: […] The transdermal absorption of E2 varies according to the different parts of the body. In men, the absorption through the skin of the scrotum is 3 to 8 times greater than in the forearm, abdomen, or back, and this is due to the large number of hair and sebaceous follicles, to the permeability to alcoholic substances, to vascularity, temperature, and thickness of the skin, not allowing substances, as occurs with androgens with 5α-reductase, which facilitates their metabolism.54–55

Table 1. Transdermal absorption of estradiol in forearm and scrotum. 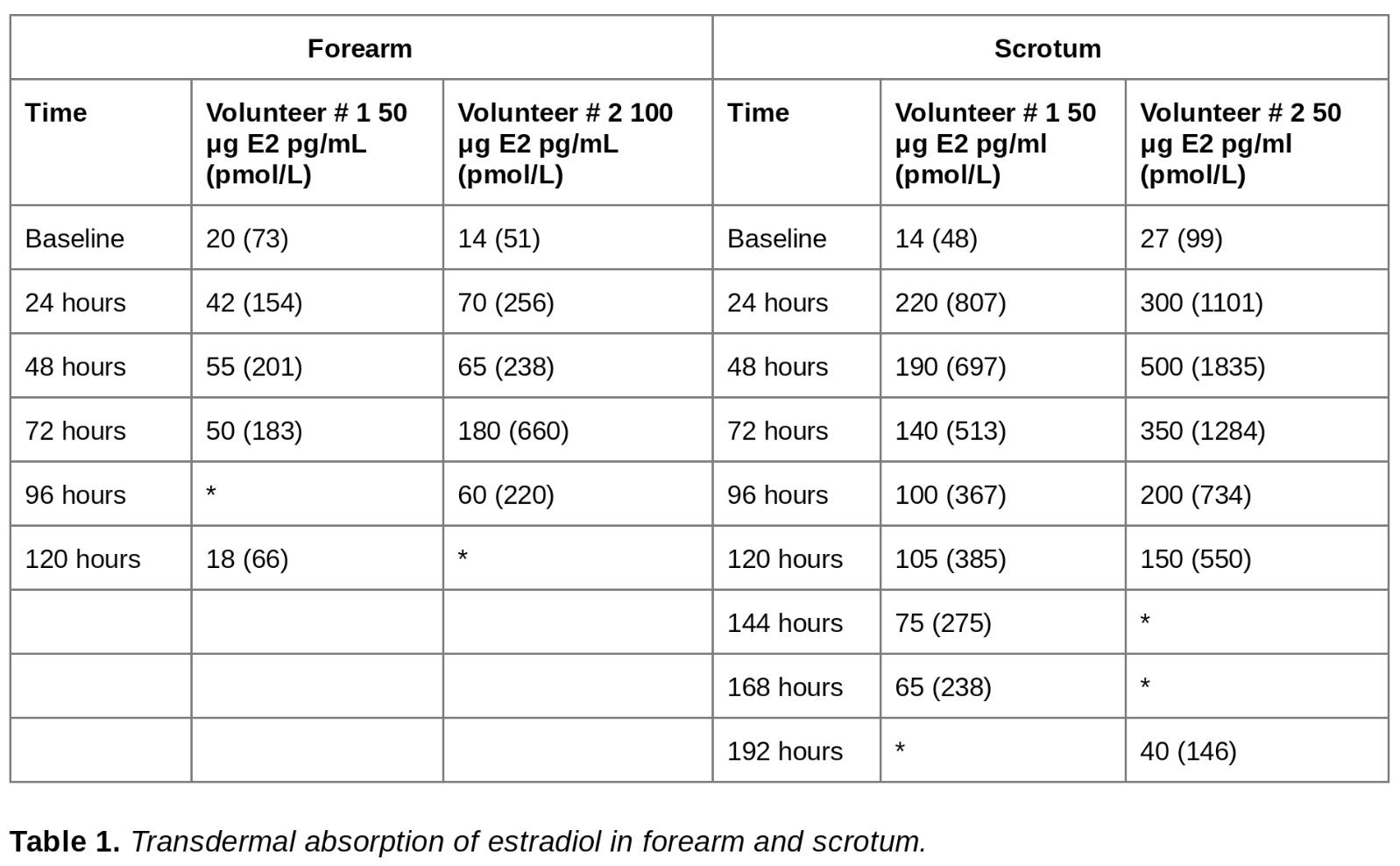 Steg in 1979 first used transdermal E2 in topical form in 21 men with [prostate cancer (PCa)]. Between 3 and 6 months, they lost T and LH, without changes in triglycerides or LDL.59

In 2001, we presented the excellent results obtained with transdermal scrotal estradiol patches (TSEP) in the treatment of “localized” prostate cancer,60 and in 2003 the results with TSEP intermittently.61

Ockrim in a pilot study dealt with E2 patches located in areas of the body other than the scrotum, […] They used six patches changed every day achieving castration levels in 21 days for LH, FSH, and T […] Bland treated 24 […] patients with six patches of 100 μg/day changed every day […] with a mean plasma E2 value of 460.7 pg/mL.63 Ockrim confirmed that transdermal E2 reduces […] These three communications in no case used the scrotal passage as the gateway for E2, since they used six patches changed daily located outside the scrotum.

In January 1997, patients with PCa were treated with TSEP. A patch loaded with 7.5 mg of long-acting 17β-E2 that releases 100 μg of E2 per day located on the skin of the scrotum was used.

The patches were applied permanently on the scrotum and were changed twice a week (every 3 or 4 days).

In two stage D1 patients, […] intermittent treatment with TSEP was applied with “on” periods of 9 months duration and “off” until PSA reached the baseline level or exceeded 20 ng/mL. […]

This communication tries to contribute to position E again in the role that should never have been lost, lamenting that if many of the resources that were used in non-estrogenic therapies had been dedicated to research in this field, it would probably have been possible to reach treatments more effective for PCa.

The administration of E2 through the scrotum proposed in this work started more than 9 years ago and that in our knowledge does not record antecedents has provided very satisfactory results.

The transdermal scrotal route obtains high levels of E2, higher than those obtained with other dermal locations, which decreases the number of patches used and exerts a positive effect on PCa and its symptoms. […] In the PCa D1 stage the intermittent treatment […] maintained castration levels of T, […]

There were no undesirable [cardiovascular] effects, hot flashes, or sweating, and gynecomastia was prevented with previous irradiation of the gland. In those who did not do it, it was not an important problem.

Some (but not all) transdermal estradiol patches can be cut into smaller portions. As many estradiol patches are pretty large, the ability to cut them could potentially be useful in the context of scrotal/neolabial application.

Matrix patches are self-adhesive and release approximately 25 µg 17β-oestradiol/24 hours. Since the oestradiol is evenly distributed throughout the patch, the patches can be cut to provide the required dose. Practically, patches are cut into half or quarter as more complex divisions would be prone to inaccuracies and impracticable. Unused patch fractions may be stored in their packaging in the fridge for up to 1 week. The patch (or patch fraction) should be applied to clean dry skin over the buttocks or hips using Opsite® (a transparent adhesive film) if necessary to ensure good adhesion. […] Transdermal patches may be more difficult to use particularly when cutting patches to small sizes as they may fall off and require tape support. (Matthews et al., 2016)

Currently, the lowest-dose patch commercially available delivers 14 μg/d E2, and the most widely used low-dose patches deliver 25 μg/d. One method to deliver lower doses is to cut the patch in smaller pieces. Patches with a matrix design can be easily cut, whereas patches with a reservoir technology should not be cut. The disadvantages of cutting patches are that handling the smaller pieces may be difficult and cutting the patches is not recommended by the products’ labels. However, there is clinical experience with this, especially in Scandinavia. There, a group showed that a fractionated patch dose (one-quarter patch of a 25-μg dose approximately equals 6.2 μg or even less) applied overnight mimicked the normal, early-morning serum E2 peak and fell back to baseline within a few hours of patch removal (17). (Klein et al., 2018)

For transdermal administration, gel and patches are available; dosing by cutting patches is more reliable when titrating the E2 serum level, and the delivery can be stopped in the morning by just taking the patch away when mimicking the circadian rhythm seen in early spontaneous puberty (Fig. 1). […] Our present recommendation is to use E2 matrix patches when available. Matrix patches are stable and have a homogenous E2 layer over the total surface and can therefore be cut into individualized doses. However, matrix patches are available with different patch areas for the same dose from different brands. The larger the patch area, the easier to cut the patch into smaller pieces for the target dose.

This is to be compared to the reservoir patches which have a separate drug layer with a liquid compartment containing a drug solution or suspension separated by the adhesive layer. By cutting such a patch, the liquid compartment will be destroyed and the drug will leak out. (Norjavaara, Ankarberg-Lindgren, & Kriström, 2016)

It is unknown how to best deliver estradiol doses below 14 μg daily. While a European matrix patch can apparently be cut into quarters so the estrogen can be delivered overnight, the US manufacturers recommend against this and our limited experience has yielded erratic plasma estradiol levels, which suggests that these patches may not be uniformly impregnated with estradiol. (Rosenfield, Kiess, & Keizer-Schramad, 2006)

Almost all estradiol patches available nowadays are matrix patches. Estraderm (an estradiol reservoir patch) is one of the only exceptions. It’s discontinued in the United States but I think is still used in the United Kingdom.

Tegaderm is another option for helping to hold patches in place; see here.

[…] topical penile therapy has a unique set of anatomic and physiological issues that must be considered. There are several anatomic/fascial layers between the penile skin and the corpora cavernosa. The tunica albuginea is presumed to be difficult to penetrate because of its thick layers of collagen. Therefore, topical treatment trials have emphasized exposure to the glans penis because it has direct venous communication to the corpora cavernosa (40,41). The skin itself is a relatively impermeable tissue because of the stratum corneum. The horny cells at the stratum corneum are bonded with a very tight intercellular lipid matrix bilayer that makes the passage of drugs challenging (42). To overcome this barrier, investigators have used penetration enhancers that permeate this layer and reach the subdermis. Fortunately, the penis and scrotum are unique in that their stratum corneum is the most permeable of all anatomic locations tested. Depending on the molecular structure of the agent tested, there can be nearly 100% absorption of topical agents applied to these areas. Exposure to the glans affords a more easily “breached” layer. Other skin regions (e.g., back and palms) are particularly impermeable (43). An additional factor confounding efficient delivery of drug is the rich vasculature of the deep dermis that may “steal” the drugs to the systemic circulation. (Hairston, Becher, & McVary, 2007)

Basically, application to penile skin, particularly the glans penis, may result in improved absorption too. So if you want more skin area to put estradiol gel or patches, using penile skin could potentially work as well. This may notably also be relevant to vaginal administration for most post-op MTFs (i.e., SRS via penile inversion technique) as the neovaginal lining is penile skin. However, no studies exist on the absorptive effectiveness of neovaginal administration.

Since the relevant article was first posted, a number of people have opted to try scrotal transdermal estradiol (gel or patches) and have provided their blood work results. These results are quite promising and can be found at the following links: #1 (Alt), #2 (Alt), #3, #4, #5, #6, #7, #8, #9, #10, #11, #12, #13, #14 (as well as three more below). Note that there is high (10-fold) variation in estradiol levels achieved both with scrotal and non-scrotal transdermal estradiol, so while most people will fall around an average, some will achieve only low levels and some quite high levels. Hence, individual cases should always be interpreted with this fact taken into consideration.

If you have blood work results to contribute, please let me know and I will link them here!

Someone shared these blood work results with me by private message and wanted to stay anonymous for personal reasons, so I’m posting the results for them:

They also provided the following from earlier in their transition:

I got my blood test to confirm the scrotal gel application. It works for me! With 3 mg of gel I was in the range of 160 pg after 13/14 hours… Using only 1 mg in the scrotum for a month I got 214 pg after 14 and an half hour with ONLY 1 mg of sandrena!!! The gel thing on scrotum work… Originally I wanted to test after 12 h with an higher result but I can’t due to lab opening. But for me it work. Generally people on 1 mg get 50 60 pg ml of e2 (me only 30 pg) max after 14 15 hours. So on me the scrotal application it’s 4 times the normal other skin application!!!