Literature Excerpts on Spironolactone and Hormone Levels in Cisgender Women

Several clinical studies have demonstrated reduced plasma androgen levels and androgen production in patients receiving spironolactone5–7. The mechanism postulated is inhibition of certain cytochrome P450-dependent hydroxylase enzymes required for the biosynthesis of androgens in the gonads and adrenals14. Menard et al14 demonstrated that spironolactone decreased androgen formation from progesterone in the testes of the male rate.

Serafini and Lobo13 demonstrated a suppression of adrenal androgen and cortisole production using 200 mg of spironolactone daily in a group of hirsute women. Androstenedione plasma levels fell with therapy whereas DHEA and DHEAS levels remained unaltered. Although decreased cortisol production was demonstrated the basal cortisol levels remained unaltered with the dosage used and the decrease of cortisol production was minimal, being only demonstrated on ACTH testing. The mechanism postulated is inhibition of 11 beta-hydroxylase by spironolactone.

However, numerous studies suggest that, in the improvement of hirsutism, the peripheral antiandrogenic effect of spironolactone in blocking the androgen receptor is more significant than any effect on androgen production.7,9,14–16

A number of clinical studies confirm clinical improvement in acne and decrease in sebum excretion rate in spironolactone treated patients9,16–18. Muhlemann et al18 showed significant improvement in acne in 75% of patients treated for three months with spironolactone 200 mg per day when compared with placebo. Although a fall in SHBG level was noted, no significant changes in plasma androgens or derived free testosterone were noted. Initial plasma androgen levels were no higher in subjects who responded to spironolactone treatment. The concomitant use of the oral contraceptive did not appear to influence the clinical response.

Spironolactone alters androgen activity by several proposed methods. In animal models, doses of 40–200 mg/kg decrease adrenal and gonadal testosterone synthesis by binding to microsomal P450 associated with 17a hydroxylase (10, 11). An active metabolite is formed which destroys microsomal heme and cytochrome P450 leading to decreased enzymatic activity (10). Several human studies lend support to this theory with evidence for decreased 21-hydroxylase (12), 17α-hydroxylase (12, 13), 17-20 desmolase (12–15), 3α-hydroxysteroid dehydrogenase (15) and 3α-hydroxylase activity (15), albeit subtle. However, humans studies are conflicting with regards to variable testosterone responses. The differences reported may be due to species variation or to the 10–20 fold smaller doses (4–8 mg/kg) used in humans. Spironolactone’s major mechanism of action is its ability to compete with dihydrotestosterone (DHT) for the androgen receptor in the prostate and skin (16–19). It may also increase the nonsex hormone binding globulin (SHBG) bound testosterone fraction (20, 21). Other reported mechanisms include an increased metabolic clearance rate for testosterone (22–24), increased liver hydroxylase activity (10,25), decreased 5α-reductase activity (26), progestogen (27, 28), and anti-progestogen (29) effects.

A decrease in hair growth and plasma testosterone levels in a hirsute, hyperandrogenic and hypertensive woman treated with Spironolactone was first reported in 1978 (37). Since that time, considerable attention has been given to this drug as a therapeutic agent in androgen excess syndromes. Table 1 summarizes nineteen investigations (14, 24, 37–53) using Spironolactone as a single agent in the treatment of hirsutism. These were compiled from a Medline search and represent most available studies. Long term hormonal evaluations were performed in the majority of these studies (14, 37–41 , 43-45, 47–51, 53). Trials evaluating hormonal changes in response to short term Spironolactone doses (i.e. 7–14 days) are not included in Table 1. The vast majority of the trials are open and uncontrolled which represents a real shortcoming (24, 37–42, 44–48, 50, 52). Five (14, 43, 49, 51, 53) of the nineteen studies included a control group and only two (49, 53) were placebo controlled and double-blind.

Ten studies evaluated subjective criteria based on personal patient observations. The definitions of a response were variable and included soft, finer hair, slower growth rates, and an undefined sense of well being. 53%-100% of the Spironolactone treated patients in the open trials reported subjective improvement. Although a subjective trend favoring Spironolactone was observed in the two double-blind, placebo controlled trials, the difference did not achieve statistical significance. A result based on personal observations in an uncontrolled setting risks the introduction of bias due to the observer and a placebo effect.

Hormonal results from the long term Spironolactone trials were very heterogenous. The majority of the changes did not achieve statistical significance after treatment. No study demonstrated a change in cortisol levels (14, 49-51) and only one (41) of seven reported a decrease in dehydroepiandrosterone sulphate (DHEA-S) levels. Previous evidence supports a decrease in cytochrome P450 dependent enzymes involved in adrenal androgen synthesis (10, 11, 13, 15, 58). Although subtle adrenal enzymatic defects that would be unmasked through adrenocorticotropin (ACTH) stimulation may occur, the combined evidence from these trials does not support a clinically significant change in adrenal androgen synthesis.

The only clear trend was a decrease in plasma total testosterone levels in 81 % of the trials which analyzed this hormone (14,24,37-39,41,43-45, 47,48,50,51). This may not be a real phenomenon as neither placebo controlled trial demonstrated a difference between the active and placebo treated groups (49, 53). The mechanism is felt to represent displacement of testosterone from peripheral androgen receptors with a subsequent increase in metabolic clearance due to availability of unbound hormone.

In an extensive literature analysis (Cochrane Review) of the use of spironolactone for hirsutism and acne in female patients, the reviewers concluded that […] spironolactone at a dose of 100 mg/day […] had little effects on DHEA, DHEA-S, or testosterone levels in the studies evaluated. This is because the mechanism of action of spironolactone occurs by attachment to dihydrotestosterone (DHT) receptors on cell surfaces, thereby inhibiting the binding of DHT to these receptors [59].

Spironolactone is predominantly utilized in clinical practice as a potassium-sparing diuretic, however it has been used off-label for acne since the 1980s. A reduction in sebum may be achieved by blocking dihydrotestosterone binding to the androgen receptor within sebocytes and inhibiting androgen-induced sebocyte proliferation [16, 17]. The systemic effects of spironolactone on adrenal synthesis of androgen precursors may also contribute to clinical efficacy, although at therapeutic doses this may be unlikely [18].

Successful long-term management of acne in adult women presents a considerable therapeutic challenge. As an anti-androgen and potential inhibitor of sebogenesis, spironolactone represents a possible alternative to oral isotretinoin and combined oral contraceptives (COCs), the only licensed anti-acne medications that significantly reduce sebum secretion, but which may be associated with serious adverse effects in some patients [20, 21].

Table 5: Summary of the modes of action in acne of spironolactone and anti-androgens used as comparators or concomitant medications within the RCTs -> Drug: Spironolactone. […] Main mechanism: AR antagonist/very weak partial agonist. Other relevant actions: Steroidogenesis inhibitora (specifically 17α-hydroxylase and 17,20-lyase), possibly only at supraphysiological doses in man. Data from over 50 articles reporting effects on serum androgens are equivocal. […] 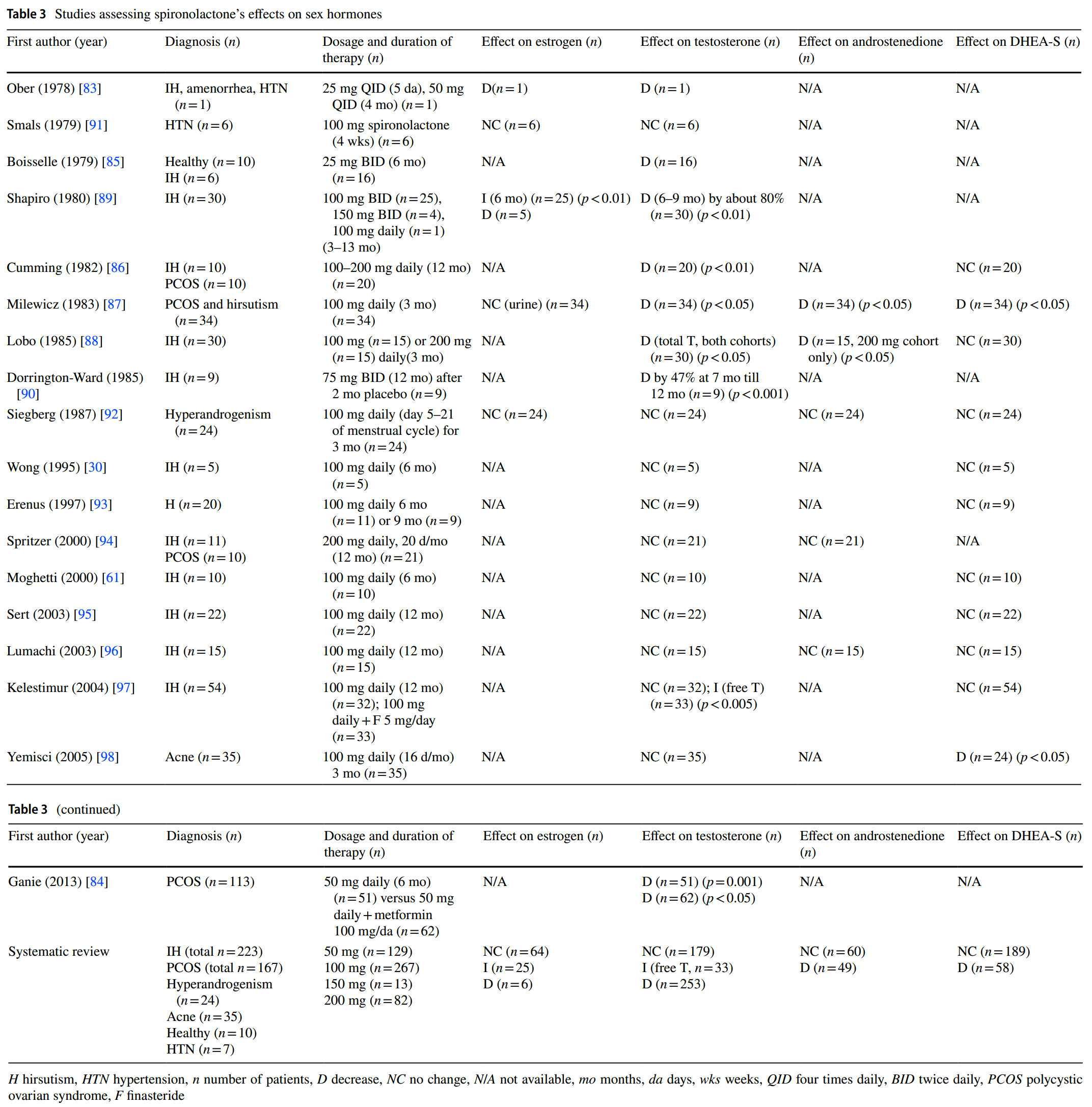